Months ago, my husband Brett and I rented the DVD version of a movie we’d hoped to catch in the theater—the corny-on-the-cob
Jack Black flick, Nacho Libre. We figured
the film would register as background noise for Jack that night. We were wrong.

Ever since Jack had his first taste of Nacho, he’s been
spellbound by capes, masks, and stretchy pants. Inspired first by Nacho, and
later by other super-heroic hunks, Jack relied on resources at hand to create
his very own costume. He came up with a very distinct look (which every superhero needs):

He has been using that hot-pink batik sarong as a cape for
months. Creative? Yes. Dignified enough for superhero status? Well . . . it depends on what kind of superhero he wants to become.

This weekend, I decided to design a one-of-a-kind cape for
Jack. We sat down together, picked out colors, and we even drew it together, as
you can see here: 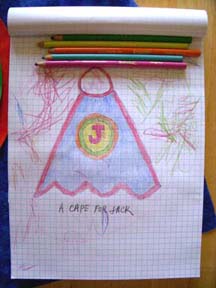 When I drew a fat red “J” in the center of the cape, Jack jumped up, still
gripping a colored pencil in each hand, and screamed with glee:

When the earsplitting shrieking began, I smiled. I had
triumphed. 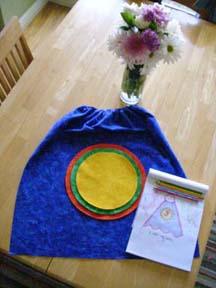 I’m about halfway done with the project now. Aside from the
relentlessly repeated “Is it done yet?” query, Jack has been helpful, patient, gracious—even
self-sacrificing, in that he has allowed me to work on his cape without
interruption at least 10 minutes in a row on two occasions.

Sounds like the makings of a superhero to me.

1 thought on “A superhero is born” 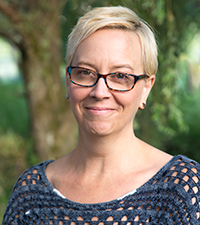